Consider a gift for Christmas which is exciting, interesting, stimulating, thought provoking and enduring. Tip – you won’t find it in DJs or Harvey Norman.
Consider the gift of art for Christmas. Give or better still, receive, art for Christmas.
Bubble-wrapped or crated, box framed or pinned to the wall, 5 channel HD video or ephemeral floor piece, however it is disguised under the tree, the gift of an artwork (or 2) is worthwhile.

This blog is a take on a popular Christmas song, though without the rhyme or tune. If you can find a beat here, feel free to tap along. Here are a few gift ideas.

On the 12th day of Christmas my true love (I hope he’s reading this) gave to me  ….
12 of the 14 works that comprise Civilised a suite of photographs by Michael Cook. Cook is an Indigenous photographer whose works seek to re-think and re-define our predominately European based view of history; to tell an Indigenous history.
Civilised is both romantic, sharp and witty: Indigenous models pose in olde worlde clothing from various nations which attempted to colonise the Great Southern Land, standing proudly but somewhat incongruously in a frothing shore break. No landscape vistas, headlands or jetties as points of reference, but clothing, a couple of accessories and gentle seascapes evoking far away places. Inscribed notations on the images are quotes from diaries of the various explorers (Dampier, Cook etc) or Indigenous people – creating different cultural takes on a well known historical lineage. Cook says of this series of photographs:

“Captain Cook wrote ‘these people may truly be said to be in the pure state of nature, and may appear to some to be the most wretched upon the earth; but in reality they are far happier than … we Europeans.’ What was the colonisers’ view of what it means to be civilised, and would a better understanding of Aboriginal cultures have made a difference to our history? Was being civilised about fashion, speech, cultivating the land, having Christian beliefs,or was it to do with the colour of someone’s skin or how they appeared?” Michael Cook, 2012.
He shows with Andrew Baker in Brisbane.
On the 11th day of Christmas …
consider renting from Artbank, the recently commissioned (by Artbank) HD video by creative collaborative duo known as Greedy Hen Morning Meeting Hallucination. It is described as “syrupy, textural and surreal in flavour …” (Daniel Mudie Cunningham, Senior Curator Artbank, 2012) which is apt – as it looks finger-lickin’ delicious. Theirs is a playful, quirky approach to retelling and describing the stuff of everyday life by way of album covers, posters, videos and art in a way that feels a bit retro, a bit homemade, but stylish and all their own. Check it out on vimeo.


Greedy Hen has promised editioned prints too, not yet but soon. Hold onto this idea for 2013. Keep an eye out on their website.


On the 10th day of Christmas …
Stephen Ormandy created a handful of small sculptures in coloured resin for his latest show at Tim Olsen Gallery (to become OlsenIrwin in 2013). Gently contorted, twisted pipes of solid but translucent colour, the sculptures are a lovely mix of his paintings and his other job (Dinosaur Designs), designing objects. Colour and form twist and blend to become something delightful.

On the 9th day of Christmas … I’d be very happy with a piece from Shona Wilson’s new show Plastiscenic – Future Remains at King Street Gallery. She has taken her practice another step. Though still about making beauty out of found flotsam and jetsam, it has become intertwined in a deeper idea: born of a concern for the environment and the potential for rubbish/plastic bits to somehow infiltrate their way into the DNA of natural flora. Very sci fi. Almost theatrical in presentation. The consideration and effort to create each piece reveals an incredible commitment. Each piece is so finely wrought and balanced in its unnatural state, it demands our respect.

On the 8th day of Christmas … why not look at 8 small works by Karl Wiebke from the 1,888 that are currently at Liverpool St Gallery. They’d have to be the bargain of the year. The space is vibrant with colour, as all works are spread across the walls, abutting each other. They represent a daily recording, a bit like daily jottings in a visual diary. The works are raw, immediate and personal, yet reveal much about his systematic and dedicated approach to exploring concepts in painting – colour, composition, emotion – along the path of minimal abstraction. The results are infinite.
On the 7th day of Christmas …

at least 7 minutes must be spent focussed on the new mesmerising 16mm film by Todd McMillan, Albatross. He voyaged way south to film the tossing, roiling vast ocean above which the majestic albatross sweep and dive. Soft tones, minimal sound, rolling rhythm of deep moving water, this is a fabulous film. It takes you to a time and place which feels lonely, cold and somewhat mournful: it is inspiring in its magnificence. There is something of the ancient myth surrounding the albatross – that each one is the soul of a sailor lost at sea. A very memorable piece in 2012 Primavera at the MCA, Sydney.

On the 6th day of Christmas …

Something for the couch. Retreat with something light, like Steven Miller‘s recent book Dogs in Australian Art. A whimsical and quite possibly barking mad fresh look at [man’s] best friend in Australian art.

On the 5th day of Christmas … consider a suite of etchings by Vernon Ah Kee, produced with Cicada Press at COFA UNSW. Known for his drawings, surfboards and prints, Ah Kee is one of Australia’s most political Indigenous artists today. He is unapologetically forthright, never retreating from this convictions:
“Because I am Aboriginal, because I was born with dark skin and dark, curly hair, I’ve never had the opportunity to be perceived as anything other than Aboriginal, and it has never occurred to me that I could be anything other than Aboriginal. So everything I think, say, and do is done from that position—never from outside that framework. I don’t think I’m always being overtly political. Mostly my works are simply about my life as an Aboriginal person. I use my work to establish some sort of equilibrium for myself.” Vernon Ah Kee.
The prints are based on drawings which I first saw in Natasha Bullock’s drawing exhibition, Erased, shown at the National Art School. They are extraordinary portraits of Indigneous people from Palm Island, of and about which Ah Kee has repeatedly created intense and deeply moving artworks – drawings, video installations. Faces appear and disappear out of the controlled yet tangles lines, and as John McDonald described “... are intended as a comment on the dubious way justice is administered on Palm Island… [they] convey little information but have an eerie, deathly power.” SMH, 5.03.2011 His work is not meant to make you feel comfortable but force you to think deeply about Indigenous Australians and their place in Australian history and contemporary life.
His work can be found at Milani Gallery or ProppaNow, an Indigenous artists collective, in Brisbane. 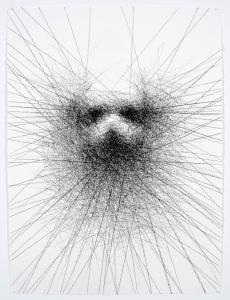 On the 4th day of Christmas …
4 tickets to Hobart please, (we’ll take the kids), to spend at least a day in Hobart at MONA, to see the guest exhibition Theatre of the World, and the evening at The Islington. This has to have become THE destination for cultural tourism in Australia in the past 12 months. While you are wandering around the area, check out GASP, a new sculpture park for art encounters and events.
If you’ve got 2 days to spare, head to Hobart.

Good things come in 3’s so on the 3rd day of Christmas ….
how about a visit to Brisbane to take in the Asia Pacific Triennial (APT7) at the Gallery of Modern Art (GOMA). As its title suggests, it only comes every 3 years (unlike Christmas) and it lives up to expectations (also unlike Christmas). Exciting, invigorating and an ambitious approach to presenting an extraordinary mix of contemporary Asian and Pacific art.

Some of it is quite artisanal, reliant on skills which are age-old but presented in a context which describes a contemporary scenario. It is a great marriage of curatorial knowledge, vision and a physical space which allows it all to come together.

There are some knock out works at APT7 – too many to describe here. One which was a stand our for me is a 3-channel video by Yuan Goang-Ming, Disappearing Landscape – Passing II. This video work is absorbing and deeply moving. You are drawn into an intimate remembering of an elderly father and a celebration of an infant daughter. It is both dream-scape and real narrative, as you float and fly through space, with trees, canals, apartments and streetscapes. Time is distorted. The camera work is intriguing.
On the 2nd day of Christmas …
a 2nd day in Brisbane is required, to wander around the very new Law Courts and take in the public art commissioned for it. Three women from very diverse cultural backgrounds and with equally diverse practices were invited to create a work each on a significant scale. It didn’t need to relate to the ideas of law and justice.
Gemma Smith completed a large scale ceiling painting -so high and so large, it is difficult to take in comfortably (a mirror on the floor might assist perhaps?). Sally Gabori oversaw the completion of a very large painting Dibirdibi Country in the Banco Court, painted directly onto the concrete slab wall, behind the panel of judges. Humbling in its beauty and inspiring in its humanity, it would be an incredible work to contemplate when wading through the mire of legalese.

Outside in the public forecourt is a work by Yayoi Kasuma. Well-known to a Brisbane audience because of a major exhibition earlier in the year at QAG, she created many different eyes in her Tokyo studio which were then realised as an outdoor, permanent artwork. No doubt a very complex process. Her eyes look back at the Law Courts, wide-open and focussed, suggestive of an ever-present, watchful and potent public. This is real coup for Brisbane to have initiated and realised such a major piece by Kusama.

On the 1st day of Christmas my true love gave to me …. something to look forward to: more travel in 2013 to art destinations, near and far.  Add to the calendar, the Art Fairs in Singapore, Hong Kong and the new Sydney Contemporary, later in the year; the Venice Biennale and lots in between. I hope to sample at least some of it and, of course, dear and dedicated follower, I will endeavour to share the experiences with you.

Merry Christmas and best wishes for a relaxing and peaceful summer break.