The art of bronze 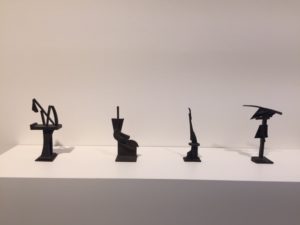 Both images: Robert Klippel No title (No. 1135), 1985  (detail) 36 lost wax bronze sculptures – unique; dimensions variable each incised with initials and date ‘RK 85’ (on the base). Cast by Brian O’Dwyer. Image courtesy the Estate of the artist and Annette Larkin Fine Art, Sydney 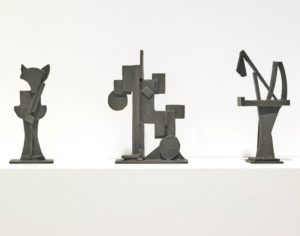 It seems that sculpture takes front and centre stage in springtime, what with the annual whirlwind of Sculpture by the Sea, the always enjoyable Woollahra Small Sculpture Prize and the increasing numbers of more modest outdoor sculpture festivals in country gardens and vineyards across NSW. And added to the usual line up this year, is a special exhibition of wondrous miniature sculptures by Robert Klippel, arguably one of Australia’s greatest sculptors at Annette Larkin Fine Art 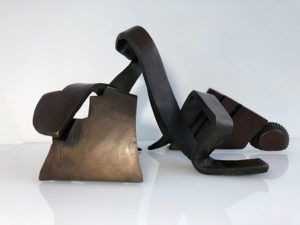 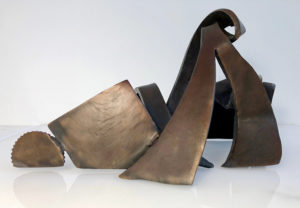 So now is a good time to look beyond the aesthetics of the sculpted form, and consider the skill, effort, time and money that was required for its creation. Should the buffoons who smashed through Lindy Lee’s artwork Moon Gate, which was inset into the pedestrian walkway in Chinatown, have had even the vaguest idea about what it took to imagine, create, manufacture and install this gentle piece, they and their ignorant managers would have understood the bronze shapes as something special and proceeded with care and respect. 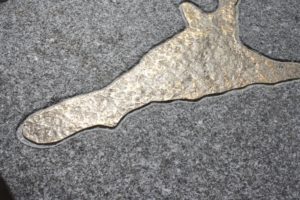 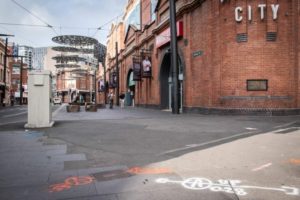 The site where Lindy Lee’s Moon Gate work has been destroyed – covered over with bitumen. Image courtesy the ABC and Jonathan Hair 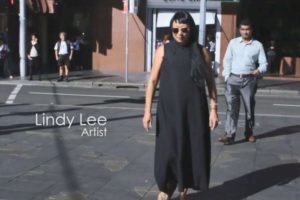 Good art of an enduring quality, comes from an invariably slow, methodical and thoughtful practice requiring technical skills and strong aesthetic principles – even when it may appear to be haphazard or hasty, simplistic or superficial. Many public commissions, prints, sculptures or digital video works are the result of a magical blend of aesthetic brilliance and technical prowess, more often than not, a collaboration between artist and master technician. Artists rely on the expertise of the master printmaker, the digital wiz, the creative engineer or the foundry worker to realise carefully crafted artworks, ambitious in idea, scale and number yet respectful of their original intentions.

Australian Bronze is a fine art casting foundry in Manly, specialising in the lost wax casting process to create bronze sculptures. Other foundries, with similar specialities and experiences working with artists are Crawford’s Casting, Artisan Bronze Sculpture Casting in Sydney, and Meridian Foundry in Melbourne.

Casting bronze objects/ sculptures is not for the feint-hearted, nor the inexperienced. It requires a high level of technical expertise in a specialist environment. It is an ancient (the Bronze Age was c3000BC – 1200BC) and complex process, done over time, with negative and positive moulds in a variety of materials required for their specific properties, to ultimately recreate an artist’s original sculpture from whatever medium, into the mix of tin, copper and (these days) silica, that is, bronze. 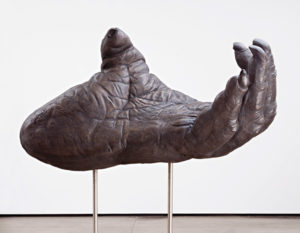 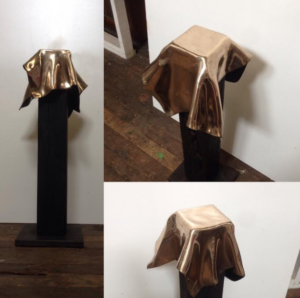 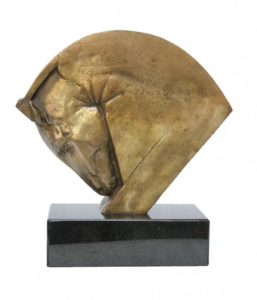 It is expensive, hence the limited number of foundries in Australia, the few artists who regularly work in bronze, and the resulting price of a bronze object. According to Clive Calder Director and Production Manager at Australian Bronze, artists who look to work with bronze tend to be older, more confident in their practice and more commercially successful.

Australian Bronze, together with Saltbush Collective, recently welcomed the public to its foundry on North Head Manly, to witness a night-time bronze pour. I’ve never known the process of taking an original sculpture to a bronze object, be it a one-off or editioned piece, so was delighted to take up the opportunity to see a foundry in action. 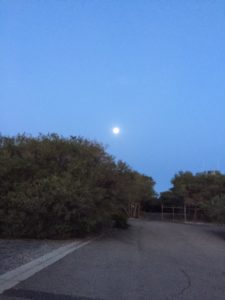 It was the stuff of secret Sydney: in the out-of-the-way environs of North Head, Manly we were outside in the dark, with all eyes (and recording iphones) on the glow of the molten bronze. 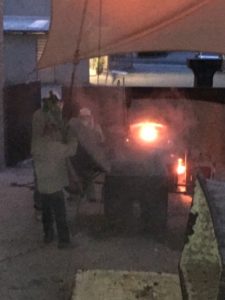 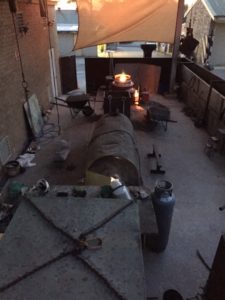 The actual pour did not take too long. By the time we arrived, the pouring temperature of 1260degC had been reached, the moulds were prepared and the technicians were in their heavy duty leather garb ready to work. The technicians worked as a cohesive team, calling instructions to each other as together they lifted and hauled the bucket aka crucible of molten metal from the furnace, via a basic, mediaeval-looking but effective pulley and gantry system, across to the prepared mould, secured in a deep protected vat, and then tilted and poured the glowing liquid metal. 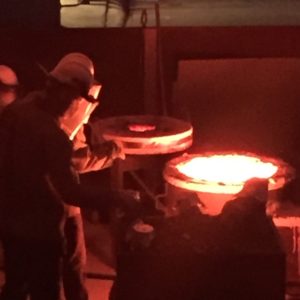 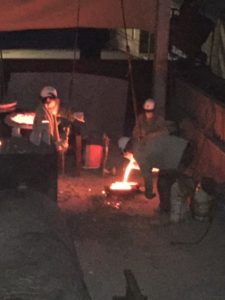 The process was not a computerised nor hands-off approach.  There was nothing glamorous about the ‘performance’: it was tough, gritty, sweaty and potentially dangerous hard work. For us eager bystanders, it was a glimpse, from a safe distance, into an age old practice.

Afterwards there was an informal chat, in an interior workshop with the lights on and working garb off, to describe the many and complex steps of turning an object into a cast bronze form.

It was the beginner’s lesson in the art of ‘lost wax casting’. I’m going to try to summarise here each step in this complicated process as simply and succinctly as possible, not so that you can try this at home but so that next time you look at a bronze sculpture, big or small, whether you look up at it or walk over it, you will have a better appreciation of how it came into being. If you think reading this requires patience and attention to detail, think about what is required to actually commit to the process….

First – have your original sculpture to be cast ready and hand it over to the technicians in the foundry.

Next – coat it with a liquid rubber making sure every bit of the work is well covered. It will require several coats and then several days to dry. The rubber layer picks up every mark and nuance of the original sculpture, ensuring the artist’s intentions, even fingerprints if so desired, are transferred through the various stages of the process and captured in the final bronze 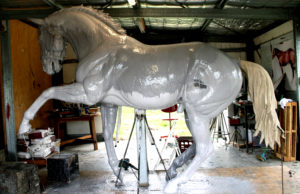 Then – create another mould in a rigid material (such as plaster) to sit over the flexible rubber one. Again, let it dry completely. This mould is the mother mould. 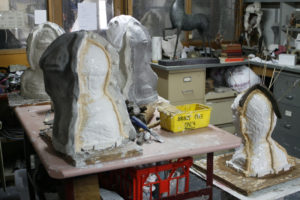 Important – hang on to this mould as it is this mother mould which can be re-used for editioning of the object.

Then – cut away the mother mould from the rubber one, along the clearly defined section seams. It is at this stage, the model has gone from a positive to a negative form of the original object. 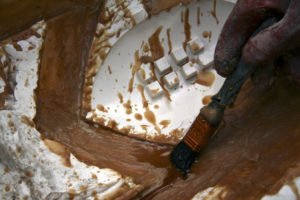 Now for the liquid wax – pour or brush the liquid hot wax, coating the entire internal surface of the mould. When the wax cools and the mother mould is removed, you have a wax positive of your original sculpture. 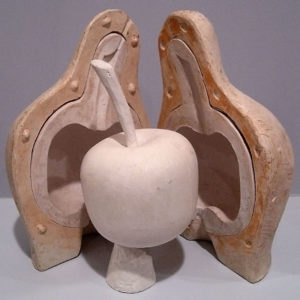 Wax apple with rubber and mother moulds. Thanks to Wikipedia

Chase the wax positive form, that is, repair and remove all imperfections such as air bubbles, seams or mould lines which appear during the wax pouring, as these surface changes are not part of the original artwork. Often it is during this stage, the artist comes back, to refine the wax form.

Next – ‘spruing’ of the wax model. A network of wax rods, called sprues or gates, are now attached to the wax model. The sprues will serve as a system of channels along which molten metal can run to all of the areas of the sculpture. The sprues also allow gases and air to escape. A wax funnel (called a pouring cup) is attached to the top of the sprues into which the bronze is funnelled. 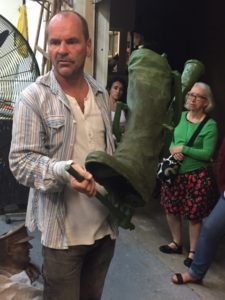 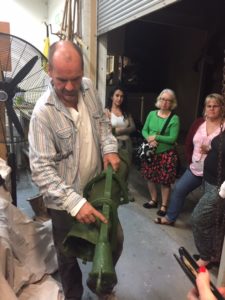 During the spruing process, special care is given to the fine points, tips, folds and crevices of the sculptural form, to ensure that these small areas take up the bronze.

Then – the shelling process or investment casting. The wax positive is dipped into a slurry mixture which when dry, becomes a hard, durable shell around the entire sculpture, allowing it to receive, hold, and shape the molten metal to produce the final figure. 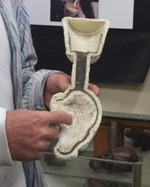 The shelling process is another one about layering and drying. The wax form is first dipped into a solvent, which cleans any loose particles or debris from its surface. It is then coated in a very fine-grained slurry. Known as the primary coating, this is where all of the fine detailing in the piece is picked up. The shell then progresses through the slurry process, dipped into progressively coarser mixtures, adding support to the overall strength of the shell. Again, each coat must be allowed to dry thoroughly. 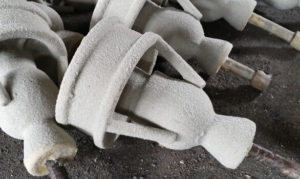 An example of the grittiness of the ceramic investment casting

Now for the actual lost wax casting part. Once the final coat has dried, the ceramic shell is fired to a high temperature, and the wax inside melts away, running through the sprues and out of the shell. Our wax is lost. With the wax gone, a detailed impression remains within the shell.

Finally, the bronze pour – The shell is then re-heated and taken to the pouring floor, where it is secured in either sand to stand by itself, or in a support frame to be held in firmly in place.

Meanwhile – solid blocks of bronze have been heated to their melting point of approximately 1260 degC. The liquid bronze is stirred and prepared for the pour. 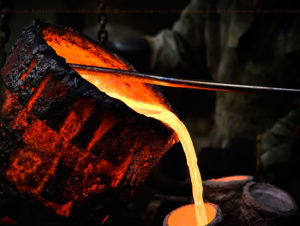 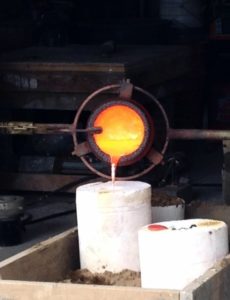 The foundry technicians lift the crucible containing the liquid bronze out of its heating furnace. The liquid bronze is poured carefully and quickly into each awaiting ceramic shell. And voila! The negative space within the ceramic shells has now become positive bronze castings. 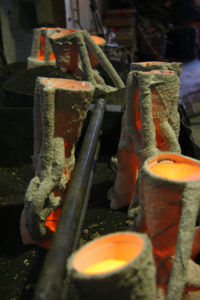 You are not done yet – once the bronze and ceramic shell have cooled, the ceramic shell and the sprues (which have now become metal) are broken off to separate it from the bronze form. Heavy duty power tools, hammers and sand blasters are called for but to be manoeuvred with a deft and cautious touch to prevent damage. 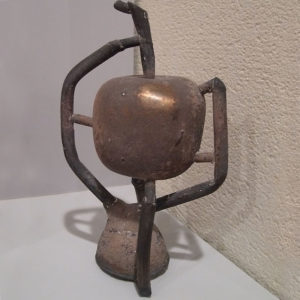 At this stage, the uncovered bronze is considered a ‘raw metal’. If cast in sections, these will need to be welded together. Once whole, it is then chased, refining and retexturing the surface and removing any section weld lines, before sand- or bead-blasting, making it smooth and shiny.

Now for consideration of the patina on bronze or the final colour of the bronze, of which there are many options from which to choose.

Patination is the chemical reaction between the bronze and acidic chemicals applied with heat to colour the surface. Different chemicals create different colours. Patination is an art in itself and, again, best done by a trained ‘patineur’ who can lend additional subtlety and nuance to the surface and folds of the work. 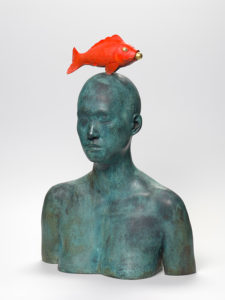 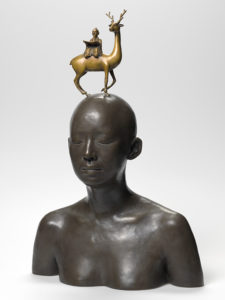 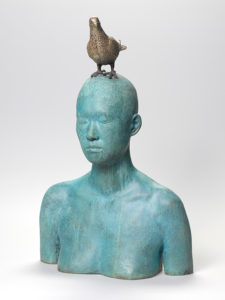 Finally the surface is sealed with a protective wax or something a little more durable if the work is to be placed outdoors.

Should you wish to edition the work (ie make another or several more), go back to your mother mould and proceed through all of the steps again.

What is important to acknowledge is that the lost wax process creates truly unique sculptures. Although the sculptor may examine each of the waxes, and double check each finished metal, because of the handmade nature of this process, each cast and each patina, though similar, will be distinctively unique.

Australian Bronze is hosting regular evening events around their working schedules of night time pours. It is a different take on a mid-week exhibition opening and I can recommend the experience. Bookings are essential.