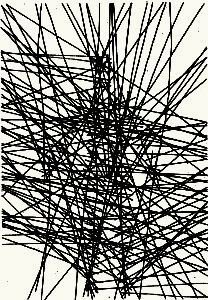 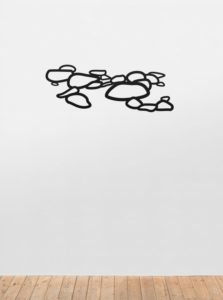 Now this would present a far more intriguing experience than the one usually on offer when navigating border control: to be met by Brian Eno and either his music, possibly Ambient 1: music for airports 1978, or one of his prints, like Agate (2016) which pulses with colour. Both would invoke a warmer welcome than the officialdom and scrutiny at customs. 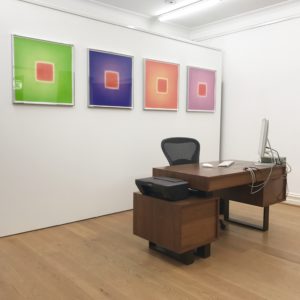 The works by Eno were featured in the group exhibition Strange Customs at -f-i-l-t-e-r-, a gallery recently opened gallery in Surry Hills. In its recent summer show, exhibited artworks were categorised as ‘declare’ or ‘nothing to declare’ and hung against the brilliant red and green hues of these bureaucratic pathways. The premiss for the exhibition was the suggestion of mobility of goods, ideas and cultural customs, all of which are in constant global flow.  I think the idea of mobility was really more of a creative excuse to introduce  –f-i-l-t-e-r-‘s particular modus operandi to its new Sydney audience, than the thematic considerations of the particular artists and artworks. 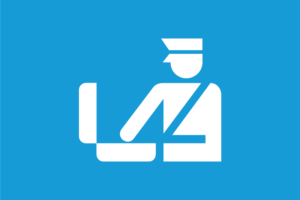 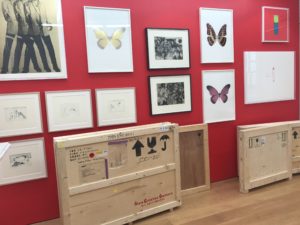 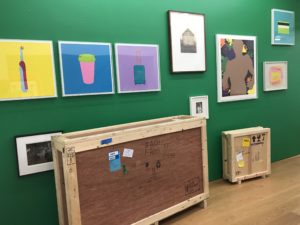 Generally these artists’ works are well-known to Australian audiences, with most of them having been exhibited here in major institutional exhibitions or public installations. Gormley has a significant installation Inside Australia based at Lake Ballard in remote Western Australia; Emin has visited Australia many times and has a permanent public artwork, The Distance of Your Heart (lots of tiny bronze birds) scattered around the northern end of the Sydney CBD. Publicity follows Hirst’s controversial practice. 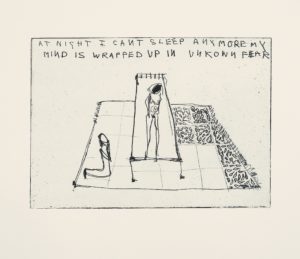 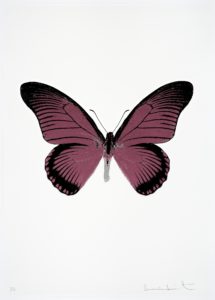 Whilst these works are wonderful to experience, it is rare that any of us has the capacity to buy and house such large-scale pieces. This is how –f-i-l-t-e-r- came into being : directors artist/critic/conservator Dr Ian Geraghty and art collector/businessman Peter Maddison, recognised an opportunity for the Sydney market, for art works by leading international artists to be made available, in a way which is  accessible, affordable and easily displayed in a domestic environment. –f-i-l-t-e-r specialises in small multiples, mostly works are on paper, prints in limited editions to be specific.

When I visited –f-i-l-t-e-r- to see Strange Customs, Damien Hirst’s luminous butterfly prints from the series The Souls together with a number of scratchy etchings by Tracey Emin, a pair of photogravure etchings by Jake & Dinos Chapman and a couple of others were in the red “nothing to declare zone”. Not that they have nothing to declare: Tracey Emin’s work is rooted in the most personal and strident of declarations.

Michael Craig-Martin has a foot in both camps, hung on both red and green walls, with his prints of motifs of everyday objects emboldened in vivid colour schemes. 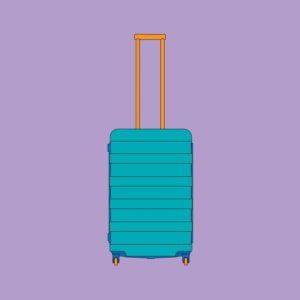 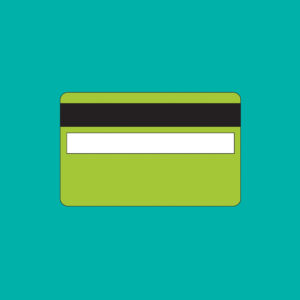 I did chortle at the irony here, given his encounter with the actual Australian customs in the late 70s. His seminal work, An Oak Tree (which, incidentally, Damian Hirst cites “the greatest piece of conceptual sculpture”) was barred entry into Australia because it was deemed ‘vegetation’. The fact that the actual artwork is not an oak, but a glass of tap water on a glass bathroom shelf with an adjacent text citing a semiotic argument as to why it is an oak tree, was missed by the over-zealous local customs officials. The work was subsequently given the green light and permitted entry to the country. It then found permanent residency when it was acquired into the collection of the National Gallery of Australia.

Seek it out when you are next in Canberra. 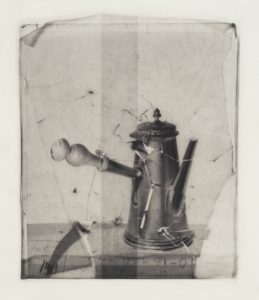 Cornelia Parker Coffee Pot Hit by a Hammer 2015. etching ed of 20. 66x54cm. Image courtesy of the artist and The Sydney Filter, Surry Hills. 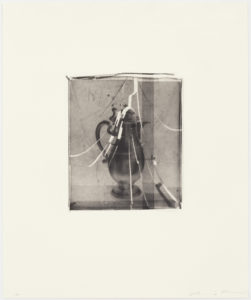 Opening next will be a solo show of recent works by Cornelia Parker, another leading British sculptor who has shared the stages with the other Young British Artists. She was included in the 2008 Biennale of Sydney with a video work at Cockatoo Island, but other than that, little of her tremendous body of work has been seen here. Her work is about the “potential of materials – even when it [appears] they’ve lost all possibilities”, when they’ve been blown up, steam-rollered, shot at or thrown off cliffs. Large-scale survey exhibitions of Parker’s work are currently being scheduled for major museums around the world which will definitely be worth watching out for. In the meantime, her show at –f-i-l-t-e-r- will offer a good introduction into her provocative practice.

The Cornelia Parker exhibition is open and runs through into April.