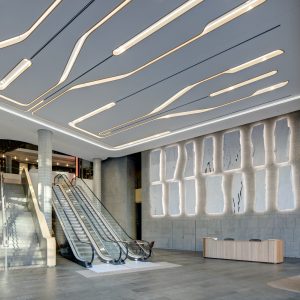 Should you go down to the railyards tonight, you’ll be sure of a big surprise! You may not have noticed, but a lot is happening south of Carriageworks, at the Eveleigh Railway Yards.

Two years ago South Eveleigh, formerly known as Australian Technology Park, was a minor tech hub, with the heritage railway workshops and a car park. Now it is a major commercial site with ‘state-of-the-art’ facilities, for businesses whose focus is innovation, productivity, collaboration and technology. It is being billed as the ‘best workplace in Australia’: our answer to Silicon Valley maybe. In May, Commonwealth Bank brought 10,000 staff to the new Axle building. Seven Media has moved in, as have other large tech and media companies.

Work and place are the major factors which have driven this massive urban regeneration project. Developers Mirvac and partners have worked with urban development leaders to transform the run-down site, into a commercial village: a place where people feel welcomed and valued.

The approach is known as ‘place making’, where commercial development aspires to excellence in design and public art, responsible and sustainable environmental measures, ease of pedestrian access and recognition of local community, culture and history.

‘Placemaking’ interweaves the human elements of wellbeing, happiness and connectedness into the urban landscape, transforming soulless spaces. It is the antithesis of constructing grids of tall buildings overshadowing windswept concrete quadrangles, or rolling out industrial ‘parks’ without any grass, swings, ducks or trees.

Good design and art are expressions of our humanity and, when embedded in shared public spaces, encourage meaningful conversations and engagement, strengthening a community’s sense of identity.

To appreciate what underscores the unique identity of South Eveleigh is to delve into its history. It is first and foremost the land of the Gadigal people of the Eora Nation, with a history that stretches back millennia. It would have been sandhills and wetlands once, a place where people lived and thrived.

Its more recent history is about the Eveleigh Railway Yards and Workshops, and the people who worked there. The Workshops were once the largest and most advanced in the Southern Hemisphere. They became a centre of excellence of railway construction and fair work practices in NSW. Many Aboriginal people came to the city, encouraged by better conditions, to work there. They moved with their families, settling in nearby Redfern where housing was affordable. Redfern became the urban heartland for a large Indigenous community and remained so, despite the downturn in the rail industry and inevitable loss of employment in the 60s.

Railway employees at closure of workshops

The public art commissioned for South Eveleigh speaks directly to this history, and its earlier and current communities.  Mirvac sought the expertise of Daniel Mudie-Cunningham Director Programs at Carriageworks, just north of the boundary, to curate a public art program, which embraced functional, sculptural and symbolic projects intended to ‘spark imaginations and conversations’.

The art program is underway, with two significant works completed and four more to come.

The Eveleigh Treehouse, by Sydney-based artist Nell and Cave Urban, is now open for business and play. Everyone of any age and stage is welcome to experience the pod-like huts, tucked away, up in the trees, to hide-away and contemplate the busy-ness of life. 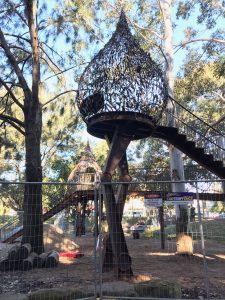 Two pods, joined by a walkway and stairs, nestle in a grove of gum trees on Eveleigh Green adjacent to the playground. They feel like wondrous gumnut characters, with their gangly (but sturdy) staunchions and squat anthropomorphic features: as if the Magic Pudding has finally come to rest.

Though the concept of the treehouse is universally accepted as one steeped in child’s play, Eveleigh Treehouse finds its soul in the history and the people associated with the site. It is built from wood and steel, the materials of the railway and, for Nell, it is an acknowledgement of her great-grandfather who worked there as a boilermaker from 1931-1952. Connections. Belonging. Sense of place.

The pods are veiled in hundreds of forged-steel gum leaves, whose making afforded an opportunity for the locals to participate. Each leaf was forged on site during workshops led by Nell and Cave Urban, using Victorian blacksmithing techniques which are still taught in one of the two remaining operational workshops. Initials of every contributor are forged in their ‘own’ leaves: a generous way for the artist to share a sense of ownership with the local community. 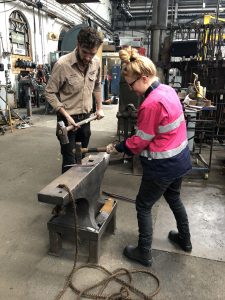 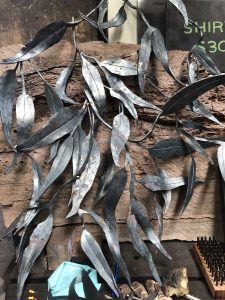 You can detour along the walkway to make your way through the park, or just enjoy a quiet lunch in the treetops. It is public art at its most joyous because however you choose to experience it, Eveleigh Treehouse will make you smile.

A second work by Nell is on the façade of nearby Yerrabingin House, a community building with Australia’s first native rooftop garden. 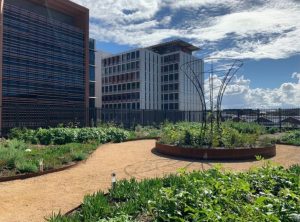 Yerrabingin Native Garden aims to become a horticultural haven of edible, medicinal and cultural plants, cultivated according to the principles of Indigenous knowledge, collaborative design and permaculture. It is open to the public, with workshops on Aboriginal culture, native permaculture and environmental sustainability.

Nell’s large-scale work speaks directly to the needs of every garden – water, especially in the form of rain. Happy Rain is an LED outline of a cloud with a smiley face, installed high on Yerrabingin, to be seen from a long way particularly at night when lit. 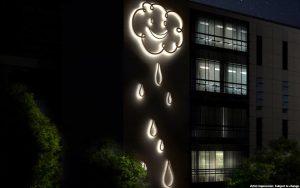 Nell ask us to “…. reflect on the relationship between weather, environment and mood, as well as the constancy of the natural world within and around our built environments”. 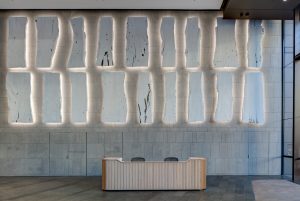 Untitled (red gum slabs) hangs in the Axle building lobby. The work comprises large old red gum timber slabs, originally harvested in the Koondrook/ Barham region on the Murray River approximately 100 years ago. Timber from this region supplied the railway sleepers in NSW. The railway yards connect to the Aboriginal people who came for work, while the railway itself provided the physical means for those people to travel here. The Murray Region from where the red gums came, was fertile and rich in resources, and, prior to settlement, sustained many generations of Indigenous people. Painted in funereal white, the timber slabs also speak to the harsh legacy of colonisation.

Jonathan’s work consistently looks to Country and Elders, for the revival of skills, languages and knowledge; for the teachings embedded in Country. His work has a gentle force, charged with traditions and customs, overlaid with a contemporary sensibility. He uses traditional designs, meaningful materials, digital media, sound and repetition to connect the histories of Indigenous culture with current times, places and practices.

A second work by Jonathan is to be unveiled soon, together with two pavilions by as yet unannounced artists. It is a case of ‘watch this space’.

As published in Urban Village, Spring edition. Urban Village is a quarterly magazine of the Surry Hills Creative Precinct. www.urbanvillage.com.au