The public in art: text-based artworks in Surry Hills 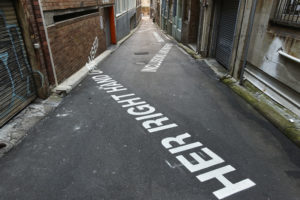 Public art comes in many guises. At its core, its role is to encourage a more meaningful experience for a community of its shared public spaces. It provides a focus to publicly commemorate an event, or person, or express a collective sentiment. It enhances our architectural and environmental surrounds and, at its best, inspires conversations around our sense of place, helping to shape a community’s sense of identity.

Tucked away in a few of Surry Hill’s more non-descript laneways are three public artworks which evoke local events and people. None are grand monuments: each are thoughtful proclamations of local experiences and which are hard to ignore once discovered in their quiet, off-beat sites.

Each of the artworks uses text rather than images to tell the stories, and explore the landmarks and vibe of this dense and gritty part of Sydney. The graphics of the varying texts are exaggerated to enhance the impact and intent of each message. Their fonts, scale and colour ensure they cannot be misread as general street signage.

Not all the stories remembered are nice ones. 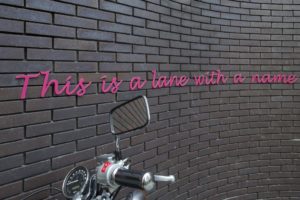 Mikala Dwyer A Lamp for Mary 2011 (detail), In Mary’s Lane Surry Hills. Image courtesy the artist and the City of Sydney

In 1996, in what was then Flood Lane (off Bourke St), a woman named Mary was brutally attacked. She later found out that people in nearby buildings had seen and heard the attack but had neither responded nor assisted. The wider community committed to remembering the violence in this neighbourhood, and to reclaiming the laneway for the safety of (particularly) women. As part of its public art program, the City of Sydney commissioned artist Mikala Dwyer to create a public artwork to do just that: it became A Lamp for Mary. 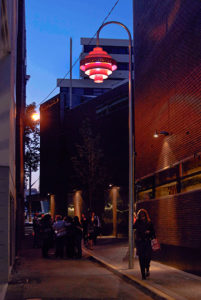 Mikala Dwyer A Lamp for Mary 2011 (detail), In Mary’s Lane Surry Hills. Image courtesy the artist and the City of Sydney

The work is in three distinct parts, with its focus on both a practical solution and emotional response to the violent history and grimness of the laneway. Dwyer created an oversized pink street lamp which glows a gorgeous hue to light a safe pathway along the laneway at night.  The subtlety of the lamp is emboldened by a single line of script across the side of a brick wall along the lane, describing the vicious attack in no uncertain terms. In a gentle cursive pink, it says: “This is a lane with a name and a lamp in memory of the woman who survived being beaten and raped here. She happened to be lesbian. When the sun sets this lamp keeps vigil along with you who read this in silent meditation.” Walking through the laneway, now officially renamed Mary’s Place, is to read the statement, see the lamp, and enter a private space in the public domain in which to acknowledge and grieve for Mary and all other women victims of violence.

Together the three gestures – the lamp, the text, the new name – become a poignant tribute and sign of hope. 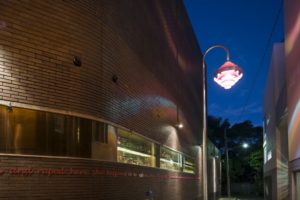 Down the hill, in Wemyss Lane, on the outer edge of Surry Hills where it nudges up against the CBD, is the text-based work of 2017 – Here, an Echo by conceptual artist Agatha Gothe-Snape. Though bolder in configuration but more obtuse in meaning, this text-based work is also rooted in the stories of the local community. 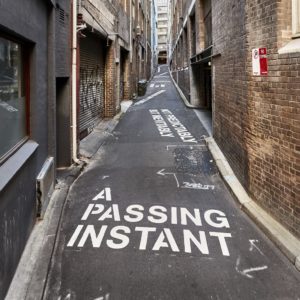 To begin to make sense of the fourteen phrases, stencilled in paint onto the ground and buildings of the laneway, is to read them in the context of an extended performance work Gothe-Snape did earlier for the 2016 Biennale of Sydney. Her performance work is unconventional: less about a passive theatre experience, and more one of research through public engagement, in which the resulting choreographed gestures reflect the artist’s experiences. The Biennale performance included a public walking group through the city, ending in Wemyss Lane Surry Hills, during which Gothe-Snape gathered ‘data’ – observations, sounds, words and emotions – she encountered from people and places along the way.

The words in Wemyss Lane are the distillation of this performance and have become its final and permanent imprint, a legacy artwork of the Biennale. Though the font and colour are more that of poster text, the meaning is not fixed nor direct: it is elusive. They are poetic snippets from her research, to add another visual layer of human experience, both individual and collective, to the rich tapestry that is Surry Hills. Read it from north to south; south to north; or as single phrases. Gradually, the painted text will weather and wear, and as the artist intends “… to be absorbed back into the laneway [becoming] … less visible. In a way, drawn back into the fabric of the city that produced it.” Agatha Gothe-Snape (2017).

Village Voices by artist Astra Howard is, on the other hand, a permanent fixture in the laneway off Crown St, opposite Lansdowne Street. Also commissioned by the City of Sydney at the request of the local community, Village Voices is a continuous collaboration between Howard and Surry Hills’ locals. 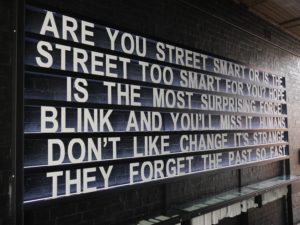 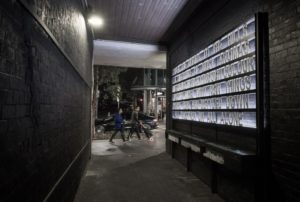 Howard is an action research artist with a day job in social services, working with many local community support organisations. With Village Voices, she invites and assists those whose voices are not usually heard to share a personal story, quote or experience which is then writ large on a purpose-designed sign board. In its sparse, tightly edited format of six lines and thirty characters, it becomes the Surry Hills version of an interactive haiku. 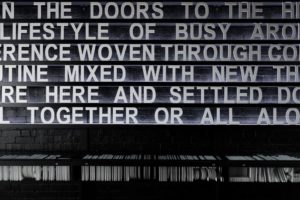 The sign-board resembles those used by schools, churches and sporting groups to make direct announcements to their local communities. The letters have the feel of oversized scrabble letters as they are rearranged every two months to declare a different perspective. Howard’s intention is to stimulate discussion and awareness around social issues affecting Surry Hills and its locals, between visitors and residents, businesses and community organisations.

New story lines were installed just recently. To find out when the next change over is – to which you are all invited to witness – connect with Astra Howard here.

It is worth making a detour from your usual route through the ‘hood, looking up from your phone and pausing to consider these public artworks and how they may, or may not, affirm a more meaningful understanding of what comprises the local community and your place in it. These laneways are not so intimidating with thoughtfully presented, well maintained artworks for company.

This article was first published in Urban Village 2019 Autumn edition by the Surry Hills Creative Precinct. The online magazine can be found here.